Extract from Song of the Seacrow by Haseley Hinton

Kesh is now Mattouk (head) of the Khoulan monastery in Morth. Ahbrem is a monk at the monastery and Kesh’s long-term friend. The king of Morth has invited Ahbrem to dine with him and the queen.

“So this protégé of Kesh’s is an engaging child?”

“Indeed. The happy relationship between them encourages me to be less fearful of fatherhood.”

The king raised one eyebrow and Ahbrem hurriedly went on, suddenly aware that he had made a blunder, trying to deflect any further conversation about Kesh’s relationship with the infant.

“I am betrothed,” he explained. “I expect to become the first Khoulan monk to marry. The ceremony is to take place this summer. … Indeed, I would be most honoured if you would attend, your majesty … your majesties.”

“Oh!” The king smiled at the sudden stumbled invitation. “Well, it would, indeed, be an historic occasion. If we have no other engagements at the appointed time,” he threw a questioning glance at the queen, “I am sure we would be delighted to accept. Yes, we will both attend, providing that no urgent matter demands my presence in some other place. Have you set a date?”

‘What am I doing?’ Ahbrem asked himself before saying aloud, “No, not yet but I am hoping it will be late summer, in the eighth or ninth moon of the round.”

“A beautiful time for a wedding and most auspicious. Summer wedding, springtime baby, don’t the old wives say?”

Ahbrem coloured and looked down at his plate. The monarch’s questions sprang back to his favourite topic.

“So Kesh has a special relationship with the Sacred Mountain child?”

“Yet the mother is a Xouthan woman?”

“Ahbrem, do we know the father?”

“I cannot answer you, my king.”

“You refuse your monarch a reply?” he waited a moment before continuing, “I know your training forbids that you should ever lie. Answer the question. Is the identity of the father known, yes or no?”

“Mmm. So not a Xouthan. Who could it have been, then? An Anthrakati?”

Ahbrem’s lack of expression seemed to lead the king to dismiss that possibility.

“Surely not a Morthern man?”

Here Ahbrem felt his features tense in anguish. His mental suffering was as excruciating as the physical pain might have been were his fingernails being slowly extracted.

“But we were at war!” the king exclaimed. “It was surely not a Morthern man! So who was this man who so betrayed his country?”

“Please, your majesty, I am sworn to secrecy. I implore you, do not pressure me to break my oath.”

But this only served to intrigue the king yet further.

“You are sworn to secrecy by one who would cause you to withhold information even from your monarch? To whom could you have made such an oath?”

Ahbrem now stared straight ahead, determined not to give his friend away.

“My nephew Kesh went on a long journey,” the king spoke quietly, as if to himself. “When he came back, he was a much changed man, much grown in stature, if not in girth, far more self-confident, sure of what he wanted and determined to achieve it. He told me that he wanted Khoulan monks to be allowed to marry. I jokingly asked him if he had someone in mind and he did not respond, which I assumed, of course, indicated a negative reply. But perhaps he did have someone. Perhaps he did. He certainly sprang to the child’s defence when I suggested, at our last meeting, that his Xouthan temperament might prove to be a problem. Ahbrem, tell me, is Kesh the father of this child?”

Ahbrem’s silence was all the confirmation that the king required.

There came a low rumble from his monarch’s throat that struck terror into Ahbrem’s heart. It rose in pitch and volume until it burst out as a roar.

“Argh! While his cousins were being drained of their life blood on Xouthan swords! How could he?”

Ahbrem was sure, in that moment, that he was about to pay for Kesh’s misdemeanour with his own young life. 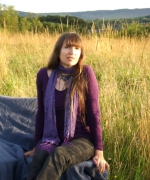 Haseley Hinton is of Anglo-Italian extraction but lives in Scotland. She writes novels and short stories which are usually science or sci fi based.