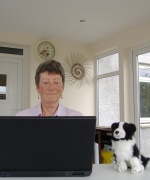 Anne Rogers lives on a croft with her husband and various animals — all of whom help to make life worth living. She writes poems and short stories, many of which are composed whilst she’s riding round the countryside on her horse or bicycle. Anne was a member of Huntly Writers between March 2009 and 2018, when her talents turned more to music than writing. 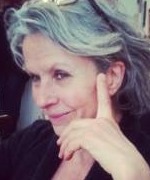 After thirty years as a farmer’s wife in Auchterless, and eight more in Clatt, Lucy is at present a migrating swallow to the North-East. She continues to spend time close to the land exploring wild places and wild living. A mother and grandmother to a large family, her writing reflects her rich and varied life.

She is a member of a small writers group in Somerset and attends meetings in Huntly whenever possible. 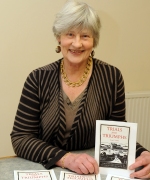 Anne was a keen member of Huntly Writers, whose comments and suggestions were a great help in her writing development. Previously she had a career in teaching in various countries, including England, Northern Ireland, Scotland, Zimbabwe and Kenya. When she and her husband, Nick, returned from Kenya to Glass in Aberdeenshire in 2001, she decided to dedicate herself to a new career in historical research and writing. She had gained a degree in History as a mature student at the University of Aberdeen in 1995. In 2012, after several years of research, her book ‘Trials and Triumphs – The Gordons of Huntly in 16th century Scotland’ was published by John Donald, the academic imprint of the Edinburgh publisher Birlinn Ltd. She wrote a play entitled ‘Who Killed the Cock o’ the North’. A whodunnit with a difference, which was performed in the precincts of Huntly Castle in 2014 by See Thru Productions from Glass. In 2014 she made a short film about the 19th century Glass benefactor, Alexander Geddes and his family, as part of a Glass film festival. In 2016 Anne and Nick, moved to Cambridge, where she joined another writing group. She is currently writing a collection of stories about the lives of their ancestors for her grandchildren and other family members. She also gave a couple of lectures on Sir Thomas Fowell Buxton, emancipator of the slaves; and ran a course for U3A Cambridge about the Gordons of Huntly based on her book. 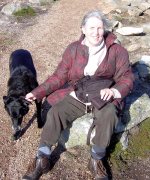 On my family’s Aberdeenshire croft the person with most time to talk to me in my childhood was my great-grandmother. Born in 1856 and educated before the Education Act of 1872 forbad the use of the Scots, she had a wide and rich Doric vocabulary. Since ever I could write I have written stories and poems, mostly in Doric. I am a retired teacher, the teuchter wife of golf-playing toonser Tom, a tractable Grandma, an occasional gardener, dowser, Friend of Grampian Stones, Mensan, one-time Munro climber now reduced to Corbetts with Labcollie Floss, and the Secretary of the Huntly Writers.

Margaret Grant, a founder member of Huntly Writers, died on Sunday 11th October 2015, aged 77, after a short spell of ill health. Margaret was a respected and published Doric poet. She was named as Makar at Huntly’s first Book Festival in October 2013 and continued to hold this honorary Poet Laureate position, until her death.

Born and brought up at Kinnoir, where her father was the blacksmith, Margaret began writing Doric poetry while at primary school in Kinnoir and throughout her youth played the piano in her father’s dance band. She married Hamish, known as Dan, on her 19th birthday in 1957; and his work on farms took the couple all over the North-east before they settled in Huntly in 1966 with their family of four; George, who died four years ago, Kathleen, Ronald and Margaret. They have 12 grandchildren and 15 great grandchildren; and Margaret loved nothing better than having all her family round about her to play cards or scrabble and had mastered the iPad so she could play word games with them remotely.

Margaret published her first book, “Jist for a Lauch” in 1999. A further collection of her work, “Anither Keckle” was printed in 2003 and, in 2008 she published “The Last Lauch.” She took her inspiration from every day events but also wrote sensitive pieces about war and the loss of life. In addition she was regularly commissioned to write poems for birthdays, anniversaries and celebrations. At the time she became Makar, a typically modest and unassuming Margaret said she was unsure about accepting the title as she could only write poetry in Doric, not English. For many years Margaret was the long-standing Treasurer of Huntly Writers and her patience, enthusiasm and support was much appreciated.

Huntly Writers are presently working with Margaret’s family to publish a new book of her work, in conjunction with Lumphanan Press. This book will include many previously unpublished works as well as well-known favourites from existing publications. Margaret’s previous books are available from Orb’s Bookshop in Deveron Street, Huntly; and will soon be for sale on this website. 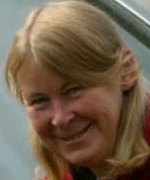 Fiona was born in England in 1949, to an English mother and Scots father. She grew up with a romantic view of Scotland and moved here in 1972. During a brief academic career, she was involved with an agriculture student and ended up as a farmer’s wife on a small farm in the Aberdeenshire hills. To supplement the household income, she wrote articles for various papers and magazines on country matters. After her two children left home the farm diversified into growing organic herbs and progressed to producing jams and chutneys in partnership of her daughter; and using vegetables grown for by her son. Fiona was a much-admired member of Huntly Writers and she often regaled us with poetry and stories of what, on the surface were simple things, but she had a knack of sharing her observations of life in a unique way.