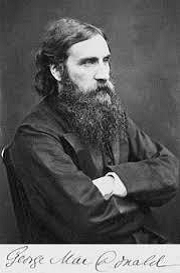 In this illustrated talk, University of Aberdeen PhD Student Rebecca Langworthy explores the impact Huntly had upon the Victorian Novelist, George MacDonald (1824-1905). MacDonald was born on Duke Street in Huntly and spent his formative years in the Farm on the outskirts of town. After attending Aberdeen University MacDonald spent most of his life in England and Italy. What is remarkable is the impact MacDonald’s Scottish roots had upon his writing. From the settings of his realist novels set in the North East of Scotland, to the ruined castles and enchanted creatures of his fantasy works, Huntly is a clear source of much of MacDonald’s creative inspiration. Looking beyond the clear parallels with the town of Huntly, this talk will also look at how MacDonald brought Scottish culture and language to a wider audience, due to his popularity in both England and America. The centrality of Huntly to MacDonald’s creative abilities goes beyond the town itself and just as MacDonald’s use of the Doric dialect within his works brought his readers closer to the Scottish language this talk will show that Huntly is evoked just as strongly in MacDonald’s works.

Rebecca Langworthy can be contacted on: r01ral14@abdn.ac.uk